The first day of the Leinster LC championships kicked off today at the National Aquatic Centre was a superb day of racing as some 29 swimmers from the TEAM turned up in style to race themselves to some great PB’s and podium finishes.

Day 1 saw a lot of young athletes race in this OPEN competition and the event kicked off with the Girls & Boys 200FC events which were busy ones for the TEAM.  Ella McNair (11) & Hannah Walshe (12) were first on the blocks producing strong PB’s to open the clubs account, before Arianne Courtney (12) & Rachel Roe (12) also posted strong PB’s before Nicole Fitzpatrick (14) and Isabella Moes (12) also posted strong swims as they gained great experience racing this relatively new event for them in the Long Course Pool.

Megan Culbert (13) smashed a big PB in her first event before being followed by sisters Ruth (18) & Anna (15) O’Gara and Ellen Walshe (13) & Nicole Walshe (16) did likewise while Jessica Burke (14) posted a very strong swim to qualify herself for the final, joining Ellen Walshe, Ruth O’Gara & Alie Martin in the finals selection.

The boys opened their account with Sean Kenny (12) leading the PB charge before Ethan Brady (12) & Joe Kenny (13) posted strong PB swims while Greg Sinnott (14) & Daniel Martinez-Dunn (12) joined Jamie Flanagan (12) and Ronan Tan (12) in the PB trail also.  A busy heat with 4 further Club boys saw Matthew Parnell (16), Eoin Feighan (16), Traolach McKnight (16) & Finn O’Keeffe (13) raced a tough heat as Parnell emerged victorious in a strong new PB for him.  The Event was finished off with Tom Giblin (16) & Evan Rossiter (14) both posting best times as Giblin qualified for the first of 4 Finals for him for the evening session.

Niamh Murphy (21) opened herr racing account with a solid 50BS swim before waiting for her best and favoured event the 50FC, where she qualified for the final, returning tonight to win the Leinster Championship title in the event and leading the girls in a strong Relay also (keep reading…..)

In the 100BC event Ella McNair (11) & Rachel Roe (12) both produced superb PB’s before Leah Martin (11) smashed a huge hole in her PB also in the event before Anna O’Gara (15) also produced a strong swim in her event.  The boys continued to impress also as Ronan Tan (12) & Sean Kenny (12) delivered the first of many PB’s in the BC before being followed by Finn O’Keeffe (13), Jamie Flanagan (12), Ethan Brady (12) & Greg Sinnott (14) before the final boy of the team converted his second Final qualifications swim as Tom Giblin (16) also posted a new PB en route to evening finals. 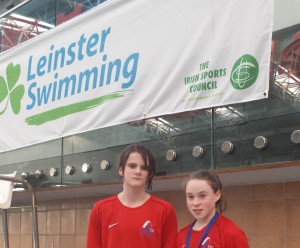 Ellen Walshe (13) & Alie Martin (14) were delighted with their efforts as Walshe posted her first LEINSTER Championship WIN in this event while Martin added her first taste of regional podium success as she posted a big PB swim to finish 3rd in the event while in the Boys event Jamie Flanagan (12) & Matthew Parnell (16) & Evan Rossiter (14) all posted big PB’s in their respective 400IM swims showing the depth of their collective development across the multiple strokes.

Walshe was back on the podium again in the 100BF after a strong Morning swim in the heats where she posted the fastest Leinster time and converted same to win her 2nd Leinster Title of the day.  In the girls too Isabella Moes (12) & Hannah Walshe (12) produced stunning swims to convert big PB’s before Ruth O’Gara (18) joined Ellen Walshe (13) in the finals of the event and again converted another strong PB in the process.

Ethan Brady (12) also led out a good swim as he opened the action in the BF event for the boys before seeing Matthew Parnell (16) and Finn O’Keeffe (13) post good swims before seeing Tom Giblin (16) convert his 3rd Final qualification swim of the morning with another impressive effort.

As the morning progressed the 200BS did not dissapoint as Nicole Fitzpatrick (14), Leah Martin (11), Arianne Courtney (12) deliver PB’s before Isabella Moes (12) & Megan Culbert (13) also smashed big new PB’s in their respective swims.  Sean Kenny (12) & Daniel Martinez-Dunn (12) were pretty pleased with their swims as were Traolach McKnight (16) and Greg Sinnott (14) before Joe Kenny (13) smashed a strong new PB and was a reserve for the nights finals, whilst Evan Rossiter (14) was delighted with his progress as he qualified for the finals this evening and again tonight posted another progression swim to finish 3rd in the ‘B’ final tonight.

PB’s were smashed in the sprint FC event as Leah Martin (11), Megan Culbert (13), Arianne Courtney (12) & Isabella Moes (12) all picked up great new PB’s before Anna O’Gara (15) & Alie Martin (14) did likewise as Martin dipped under the 30 second barrier for the first time, before Niamh Murphy (21) took to the block to convert the heat swim that allowed her access to the opportunity to WIN another Championship title in tonights 50FC finals.  Tom Giblin (16) flew the lone club flag in the sprint event as he smashed a HUGE PB to qualify for the main final in the FC event where he again returned tonight to pick up valuable experience in as an open Final swim.

The final morning swim finished off as the Girls continued to produce some superb swims as Ella McNair (12) produced a superbly paced swim to produce a big PB in her first LC 400FC, while Nicole Fitzpatrick (14) & Megan Culbert (13) did likewise as they posted strong new PB’s also to finish the day.

In the longest event of the day Eoin Feighan (16) was delighted with his swim this evening as he posted a big new PB and a sub 19:00 swim to put a smile on his face.

After a busy night of finals seeing Tom Giblin in 4 swims, Ellen Walshe & Ruth O’Gara in 2 more each while Alie Martin & Evan Rossiter gained valuable experience in OPEN competitions, Niamh Murphy produced a first place result in the 50FC to couple Championship wins by a Ellen Walshe in the 200FC & 100BF taking her personal total to Three championship titles as she picked up the 400IM earlier in the day.

The final swims of the day saw the girls convert a silver medal in the 400FC as Martin, Murphy, O’Gara & Walshe delivered some great efforts to get on the podium.  The boys did a superb job in posting strong swims also as Giblin, Rossiter, Sinnott & O’Keeffe got some good exposure in the mens relay.

Day 2 of the event continues tomorrow and the TEAM grows again in size with further athletes involved in the 2nd day of racing.  The TEAM is thriving as athletes gain more experience and confidence racing in the LC pool before they head to the Ulster Age Groups next weekend to revisit the experiences gained this weekend.