The final day of racing for this weekends Leinster AGE Group & Open Championships continued in the same vein as the previous two days of racing for the TEMPLEOGUE (TEAM TSC) Athletes.  The order for the weekend had been looking to race well and swim PB’s with many athletes looking for QT’s for various summer competitions.  After strong performances in the first two days of the meet, the athletes headed in to the final day of competition with a clear focus.

The 400FC was the first event of the day for both Boys and Girls, where Ronan Tan (11) & Jamie Flanagan (11) demolished PB’s between them to claim the Gold & Silver medal as Leinster Boys 11 & under, while in the 12&13yr event Finn O’Keeffe (13), Joe Kenny (12), Sean Maguire (13), Ethan Brady (12) & Evan Rossiter (13) all recorded PB’s in their event.  There was a superb race between Rossiter, O’Keeffe & Traolach McKnight (16) en route to a further big PB for McKnight while Greg Sinnott (14) also recorded a big PB in the same heat. Mc Knight was delighted with his 8th place finish where Eoin Feighan (15) fresh from his win int he 800FC, was also delighted with his PB and 5th place result in the middle distance swim.

In the Girls event Leah Martin (11) continued her superb suite of performances this weekend with a big PB in the 400FC while Ellen Walsh (12) also improved her PB to pick up a silver medal in the age group.  Caoilfhinn Tan (14) posted a strong swim also in her heat, while Caroline Ryan (14) & Megan Culbert (13) picked up Division 2 QT’s in their event as they also posted strong PB’s.  In the final heat of the event, Jessica Burke (14) also posted a strong swim to finish in the bronze medal in the event.

The events quickly moved on to some further Stroke swimming as Daniel Martinez-Dunn (11) posted a new PB, marginally ahead of team mates Sean Kenny (11) & Ronan Tan (11), who between them have had only tenths of a second separating them and other 11yo team mate Jamie Flanagan (11) all weekend.  Joe Kenny (12) continued his impressive form in his stroke events this weekend with a further PB in the 100BS, while Evan Rossiter (13) posted another PB to qualify for a final this evening where he finished his excellent weekend of racing with a further improvement on his heat swim and another great new PB and a 5th place finish.   The older lads in the club were well represented by Traolach McKnight (16) who raced to a new PB in the heats, securing a final spot and again improved in the Final in his event.

As the girls took to the block Leah Martin (11), Keeva Bowe (14), Alie Martin (13), Megan Culbert (13) & Caroline Ryan (14) were all chasing PB’s with the older girls all posting strong new PB swims in the main as they kept the pressure on themselves in the back end of the weekend.  In the Girls 200BF, Ellen Walshe (12) returned to the bloack o deliver a skilful display in both heats and finals to win gold in her age group and also repeat her qualifying times for the British Age Groups in July.

In the final individual event of the weekend Sean Kenny (11) led team mates Ronan Tan (11) & Daniel Martinez-Dunn (11) to PB’s in their 100BC swims as Evan Rossiter (13), Finn O’Keeffe (13) and Ethan Brady (12) posted strong but ired swims in their age group with Eoin Feighan (15) & Greg Sinnott (14) posting solid swims as Sinnott earned himself a strong 4 second PB with his effort.  In the Girls BC event Leah Martin (11) picked up another strong PB for the weekend, while Keeva Bowe (14), Alie Martin (13) & Caroline Ryan (14) all posted strong swims as Bowe & Martin also picked up their final PB’s of the weekend.  Jessica Burke (14) & Caoilfhinn Tan (14) both posted swims to qualify them for the finals with Burke posting a further improvement in the evening to finish in the 3rd place Bronze medal as Tan finished in 6th.

The Final team event of the weekend saw the Templeogue Boys post valiant efforts in the FTR but failing to make the podium, finishing in 4th & 5th while the Girls proved their steel as the A team swam strongly to post a 3rd place finish in their event and the B team finishing in 7th place.

All in all this was a fantastic WEEKEND and here are some numbers to make the point. WELL DONE to ALL!!! 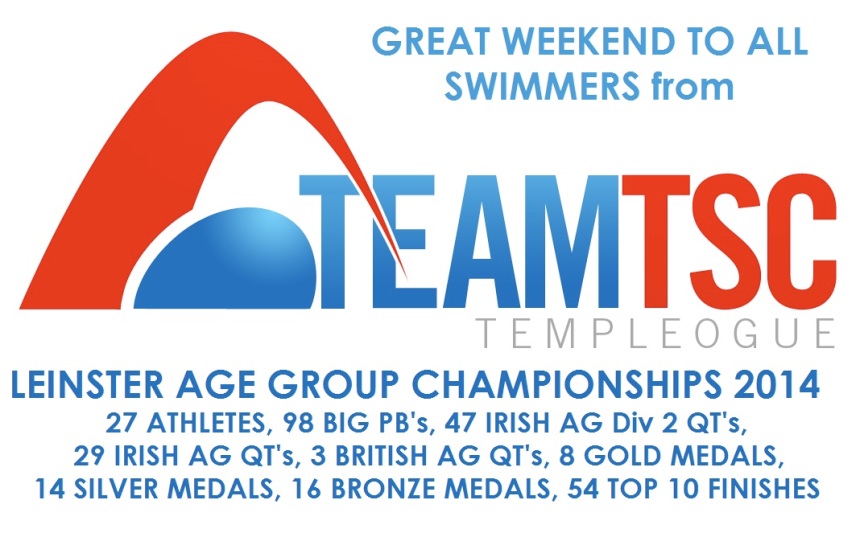